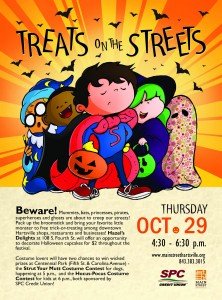 From pirates to penguins and from gladiators to ghosts, downtown Hartsville receives a crowd of unusual visitors every year for Main Street Hartsville’s Treats on the Streets downtown trick-or-treating. On Thursday, Oct. 29 from 4:30 to 6:30 p.m., one of downtown’s biggest events will have its biggest year ever, bringing together not just children and families making their way among local shops, restaurants and other businesses, but also costume contests for children and dogs alike, sponsored by SPC Credit Union, and a deejay broadcasting Halloween music.

The family fun will take place along Carolina Avenue from Fourth to Sixth streets, as well as Fifth Street from Carolina Avenue to Home Avenue. Every downtown business is invited to participate, along with every Main Street Hartsville partner located outside of downtown. Outside-downtown organizations which have not become Main Street Hartsville partners may also join in for a $25 fee by contacting info@mainstreethartsville.org or 843.383.3015.

Throughout the event, Hazel’s Delights, located at 108 S. Fourth St., will give trick-or-treaters a chance to decorate their own Halloween-themed cupcakes for $2.