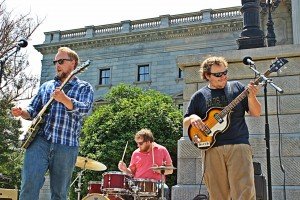 The last of the Fall 2015 Downtown Block Party dates will arrive this Thursday, Oct. 8, when Columbia’s blues rock band Skymonk will play on the streets of downtown Hartsville.

A street concert and festival sponsored by Groucho’s Deli, Little Caesars, Novolex and First Citizens, the event will take place from 6 to 9 p.m. on Railroad Avenue, close to the Coker Avenue intersection and Coker College’s DeLoach Center. The evening will also feature another preliminary round of the Hartsville Icon competition, an opportunity for local performers to show their skills to a live audience and win a chance to be voted on to the next round.

Skymonk, a band formed in 2012 which plays with a sound centered in energetic rock, syncopated rhythms and soaring melodies that move and connect with audiences, features Kelly Nash on guitars and vocals, Scott Roberts on bass guitar and vocals and Ben Evans on drums. In its own words, the group “prides itself on being an enticing live show and cause for a closer listen with the windows rolled down and the radio turned up.”

Another installment of the Hartsville Icon competition is scheduled at 6 p.m. as the concert’s introduction, giving a chance for local musical acts to play to the crowd and potentially advance to the final round during the Duke Energy Lights Up the Night Community Festival, coming Oct. 24 to the same location on Railroad Avenue and Coker Avenue. The grand prize on the final date will include a $200 cash prize, a chance to perform during the monthly Hartsville Farmers Market, a free spot in the Hartsville Christmas Parade and a family pass to the Piratesville Splash Pad at the Byerly Park Recreation Complex. The application fee to perform is $10. Applications can be submitted electronically at www.mainstreethartsville.org/programs, and those interested can learn more by contacting info@mainstreethartsville.org.