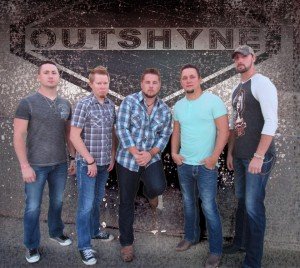 Main Street Hartsville’s Downtown Block Party series of street concerts and vendors is opening up to a schedule of moving event venues this fall, with the first performance by renowned South Carolina country group Outshyne arriving on West Carolina Avenue for the first time ever. Sonoco has provided the sponsorship for this kickoff of the fall 2015 series.

The concert is scheduled for next Thursday, Sept. 10 from 6 to 9 p.m. on the block of West Carolina Avenue between Fifth and Sixth streets. The street closure will begin at 2 p.m. to allow for setup. Another new concert feature being introduced this fall, the Hartsville Icon competition, will give amateur performers a chance to play to a live audience during intermission and win a chance to advance to the next round of competition during the Duke Energy Lights Up the Night Community Festival on Oct. 24.

Outshyne (www.outshynemusic.com), a country band with rock influences, is now playing more than 150 dates every year and has opened for such stars as Jake Owen, Eric Church and Lee Brice. Their first single, “Dirt Road Romance,” written by Florida Georgia Line and Arlis Albritton, rose to #29 on the Music Row Chart. Their album “Starting Over,” produced by Grammy-nominated Chip Matthews and songwriter Jeffrey Steele, debuted at #11 on iTunes the day of its release. Their single “Moonlight Crush” hit #1 on Sirius XM’s The Highway Countdown, and was the station’s #18 song of 2014. The two singles combined have reach more than 100,000 downloads.

The Hartsville Icon competition, taking place during intermission for all three of the fall’s Downtown Block Parties, will allow up to five musical acts to compete and advance to the competition’s finals during the Oct. 24 Duke Energy Lights Up the Night Community Festival. The grand prize winner on that date will win a $200 cash prize, an opportunity to perform during Main Street Hartsville’s monthly Hartsville Farmers Market events, a free entry into the Hartsville Christmas Parade and a family pass to the Piratesville Splash Pad at the Byerly Park Recreation Complex. The application fee to perform is $10. Applications can be submitted electronically at www.mainstreethartsville.org/programs, and those interested can learn more by contacting Suzy Moyd at 843.383.3015.

After the Sept. 10 concert, two more Downtown Block Parties are still coming this fall, and at a different location each time. On Thursday, Sept. 24, a group led by Hartsville’s own Folk/Americana artist Dylan Sneed will perform on East Carolina Avenue between Fifth and Sixth streets. On Oct. 8, Rock/Alternative/Blues group Skymonk will perform in a concert located by the intersection of Railroad Avenue and Coker Avenue, near Coker College’s DeLoach Center.