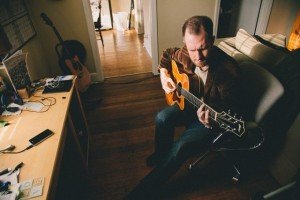 The Downtown Block Party series opened with its biggest crowd ever with its Sept. 10 performance from Outshyne, but the fall 2015 street festival still has plenty more to offer, beginning with renowned performer and songwriter Dylan Sneed returning to his “adopted hometown” of Hartsville.

Sneed will play next Thursday, Sept. 24 from 6 to 9 p.m. in a performance sponsored by Black Creek Arts Council. This installment of the series will happen on East Carolina Avenue, between Fourth and Fifth streets, and will again feature the Hartsville Icon amateur performance competition, which found its first finalist last time with Zachary Bradshaw.

An accomplished, internationally-touring musician, songwriter and teacher, Sneed has made his mark on the Hartsville music scene in many ways, including his creation of the concert series known as Artsville (www.welcometoartsville.com). He has continued his involvement with the organization even after relocating to Brooklyn, N.Y. in 2013. Sneed, who continues to write, record and perform his own music while developing new Artsville initiatives nationwide, has influences ranging from Bob Dylan to the Avett Brothers and has been described by the Dallas Observer as representing “the best side of true Americana: music of passion and skill that can move an audience with a whisper or a roar.”

Thursday’s concert date will also feature the second opportunity for amateur performers to take the stage during intermission and contend for a spot in the final round of the Hartsville Icon competition. The finals, which are scheduled for the Saturday, Oct. 24 Duke Energy Lights Up the Night Community
Festival on Railroad Avenue in downtown Hartsville, will offer a $200 grand prize. Additional prizes include a performance booking during the Hartsville Farmers Market, a free entry into the Hartsville Christmas Parade and a free season pass to Byerly Park’s Piratesville Splash Pad. The application fee to perform for Hartsville Icon is $10, and online applications are found at www.mainstreethartsville.org/programs. To learn more, contact Suzy Moyd at 843.383.3015 or suzy.moyd@hartsvillesc.gov.

Thursday’s concert will not be the last in the regular Downtown Block Party series. A couple of weeks later on Oct. 8, Rock/Alternative group Skymonk will perform on Railroad Avenue from 6 to 9 p.m. At the same Railroad Avenue location on Oct. 24 from 5 to 10 p.m., the Duke Energy Lights Up the Night Festival will bring together vendors, food, truck displays, a performance by beach music band Terence Lonon and the Untouchables and hourly indoor laser shows at Coker College’s DeLoach Center.
The cultural and artistic components of this program, the Sept. 24 Downtown Block Party, are funded in part by the Black Creek Arts Council of Darlington County, which receives funds from the South Carolina Arts Commission, the John and Susan Bennett Memorial Arts Fund of the Coastal Community Foundation of SC, and the National Endowment for the Arts.